Westmoreland County is located in northeastern United States, within a 500-mile radius of 70 percent of the country's total population. Founded in 1773, it is the second-largest county in southwestern Pennsylvania. The county encompasses more than 1,000 square miles of varied topography and is home to a population of 354,663.

This vibrant county enjoys natural beauty, a great historical legacy, a thriving economy and pleasant communities. In many ways, Westmoreland County is located in a Goldilocks zone that many say has the "just right" blend of convenient access to urban amenities and outdoor recreation opportunities in the scenic Laurel Highlands. Just to the west of the county is Pittsburgh, once named "America's Most Livable City" and the center of the 10-county southwestern Pennsylvania region. A symbol of renewal, this one-time industrial region now enjoys a balanced, innovation-driven economy. 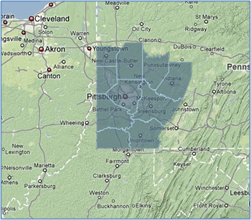 Westmoreland County offers outstanding agricultural resources, innovative companies, top-rated universities and colleges, award-winning hospitals with excellence in healthcare and world-class culture. Plus our people put more into everything they do — more time, more effort, more pride! Our strong industrial heritage has produced a traditional hard-working, yet technologically advanced workforce that aims for success. Fully aware of the importance of location, the county has developed a robust industrial park system that, with various existing facilities, offers plenty of sites in Westmoreland County for your business. Perhaps even more importantly, we have a support network for the business community that came about as a result of a unique public/private partnership. This team of economic development professionals is available to assist with important decisions regarding site selection, planning, financing and other business needs.

Westmoreland County Board of Commissioners

Government in Westmoreland County is shared among the county and the cities, townships, and boroughs within it, under the laws of the Commonwealth of Pennsylvania. The Pennsylvania Constitution sets up the county government with its elected row officers, but each municipality functions under its own code of laws. Almost everything originates on the local level, placing the government of the people closer to the people.

Westmoreland County consists of 10 row offices enumerated by the Pennsylvania Constitution, although the powers and duties are prescribed by state statutes and county codes. The chief governing body is the Board of Commissioners, a three-member board elected by the people and serving four-year terms.

The other row offices include the clerk of courts, who is responsible for all the records of the Westmoreland County Court of Common Pleas; the controller, who administers the finances; the coroner; district attorney; a prothonotary, who supervises all civil and family court records; a recorder of deeds; a register of wills; the sheriff and the treasurer. The populace elects all row officers.

The area of Westmoreland County is 1,036 total square miles